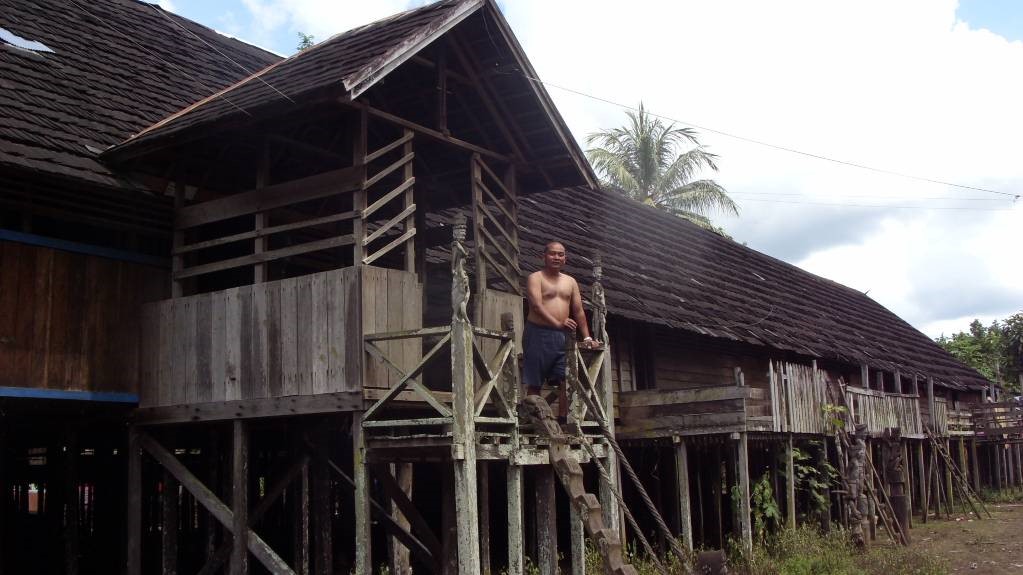 Mahakam River Cruise Tours over the river which is 920 kilometers long, with its spring far in the highlands of the Muller Mountain , which forms the boundary between East and West Kalimantan, between Indonesia Kalimantan and the Malaysian state of Sarawak.
The river as many tributaries, and in a number of places is 400 to 500 meters wide. With it’s length of 920km the River is the second largest river of Indonesia, starting at the Muller Mountians and ending in the Sulawesi Sea.
The muddy river at some places will be up to 2 Km wide and is the high way in to the interior of East Kalimantan. The lower half of The Mahakam River is populated by Malay and Kutai tribes, the upper half by the native Dayak tribes. Your journey will take you.through impenetrable tropical forest and dense undergrowth draped in giant orchids , mangrove flowers and lianes.
Instead that much of the jungle is secondairy growth or has been clearcut. The wildlife is unusually diverse, monkeys, gibbons, wild ox, wild cats, flying lemur, martins , weasels, fresh water dolphins, orang utans, sun bear, leopard, snakes, hornbill birds, parrots, parakeets, and crested fireback pheasants. Also many kinds of beautiful butterflies and metallic beetles, poisonous polypods, brightly colored millipedes & giant walking sticks can been seen. To get an impression of the different Dayak cultures & lifestyles, head up to the rivers tributairies.

Barong Tongkok is a nice village and good for spending the night. Several small waterfalls are found in its surroundings. There are lodgings, shops, and motorcycles to take visitors to other Dayak villages. Linongangmapan is 300 meters aside from the village road between Barong Tongkok and Tering. An ancient megalith site is found here. Kersik Luway National park with its wild orchids and pitcher plants at a distance of about 40 kilometers from Barong Tongkok.

Melak is a rather busy little town and the capital of a district. It can be reached from Samarinda in about 20 hours or from Tenggarong by motorboat. The inhabitants of Melak are Dayaks of the Tunjung sub-tribe. Lodgings, Hotels and a modest restaurant are available in Melak, it has an old longhouse (betang) at Eheng, also Local handicrafts can be bought here

Kersik Luway is National Park (reserve) between Melak and Barong Tongkok, to the south. The "Black Orchid" (Coelogyne pandurata) which blossoms between April and December, grows on shrubs in this 5,000 hectare reserve. Many hundred of other orchid species also grow in this forest. The reserve is located 400 kilometers from Samarinda and can be reached in 32 hours by boat. Other tourist spots in this regions include Jentur Gemuruh waterfall and Kersik Kerbangan, a forest known for is wild orchids. Visitors usually stay at Sekolag Darat village.

Pepas Eheng village belongs to the Barong Tongkok district, 209 kilometers from Samarinda . Plait work, rattan furniture and Tunjung Dayak statues are made here. The village can be reached from Melak in one hour by car. Muara Oahu is a district town at the meeting point of the Kedang Pahu and Lawa river, in the Mahakam hinterland. Twenty-eight villages, with a total population a bout 11,000 are found in this area.

Main Interest & Tour Activities :
Dayak Culture and Jungle Trek
recommended visit time is 1 or 2 days
Dayak Tunjung and Dayak Bahau are the major tribes in this area of Eheng.The area along Eheng is filled with Rubber plantations, and lowland rainforesta Traditional longhouse with 35 Dayak Tunjung families can be found at Eheng village about 50 km from Melak.
Black and other wild orchids at Kersik Luwai Reserve about 35 km from EhengOmbau Asa waterfall about 10 km from Eheng.
Tering Lama is the place where Dayak Bahau and Hudoq ceremonies can be found, its about 25 km from Eheng.
Melak and Tering villages are jump off points to the hinterland of the Mahakam river if public ferries can not cruise further up the Mahakam river.Jungle Trek can be done between villages

Tour Transport Possibilities :
by Public Bus from Balikpapan to Samarinda, cruise up Mahakam River by public ferry, or by chartered motorcanoe to Melak either Tering village, from here chartered cars have to be used to surround the area, no public transport is availeble here.Daily public buses go up to Melak and Barong Tongkok from Samarinda bus terminal.
Estimated travel time to reach Eheng is 2 to 3 days from entry point Balikpapan.

Travel Distance to entry point :
450 Km to from Balikpapan Airport

Tour Duration :
Short Get Through Visit 5 to 6 Days