Visit the floating market of Banjarmasin as being part of Kalimantan ’s river-life, we explore the unique Banjarese trade of commodities as fruit, and vegetables from boat to boat. From Mount Tangkiling, we get a view over Kalimantan ‘s emerald jungle landscape from the top. Cruise the Rungan River to Orangutan Islands, where we can spot the orangutans from the river side, at Nyaru Menteng arboretum we got information of the rehabilitation process of these wildlife creatures.

Trek the jungle of the Meratus Mountain which lead you through primary forest to Dayak villages. By Bamboo Raft Downstream Amandit River enjoy the forest landscape of the river banks. Visit the unique Banjarmasin floating market, and view the emerald jungle from Mount Tangkiling. Cruise the Rungan River to the Orangutan Islands, where we can spot the orangutans from the river side, at Nyaru Menteng arboretum we got information of the rehabilitation process of these wildlife creatures. 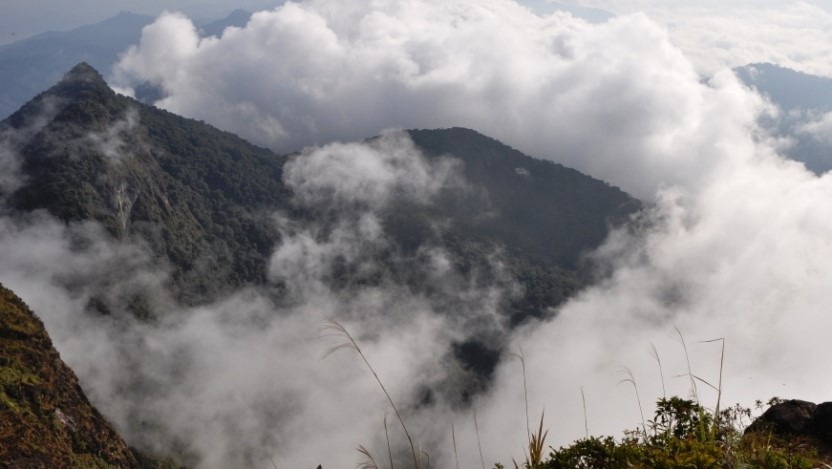 Hiking through forest & Dayak land farms with rubber and pepper plantations in South Kalimantan in to the Meratus Mountains Jungle Longhouses villages, the trip lead over hilly jungle trails, through the rainforest paths of the Meratus Mountain slopes and valleys, crossing hanging river bridges in the dense jungle, by Bamboo Raft sailing downstream Amandit River to Loksado Muara Hatip village and enjoy the flora & fauna of the river banks. Once Back in civilisation in Banjarmasin City we will visit the floating market and do a canal tour

Banjarmasin is the main entrance gateway for tourist to visit South Kalimantan Province of Indonesian Borneo Island, this city is unique in several aspects. The Coastal wetlands and surrounding marshes often floating in salt sea water, even dry season when the river water level decrease, wells and ponds become salty in the region.
This river environment, gives this old Banjarmasin town an appeal that is all unique its own in Kalimantan, where river life of two floating markets in town make busy trading centers. The city also has famous local and traditional markets as Pasar Baru, Kuripan Market and some modern markets such as the Antasari Shopping Center. During the Ramadhan fasting month the Cake Fair is an event in which sweet cakes are sold during the late afternoon as street offerings, on Jalan Martadinata.

Floating Market
The Floating Markets of Banjarmasin are traditional markets at the estuary of the Kuin river, and Martapura River as a tributary of the Barito River stream. From daybreak boats come from villages around the rivers Tabuk, Jelapat, Anjir and Selapat, bringing fresh vegetables, fruits and other daily household needs to be trade from boat to boat at the Lok Baintan and Kuin Floating Markets. Buyers and sellers make their buy and sell transactions on the river boats, which supply all fresh daily needs in a cheerful floating market atmosphere. In the early morning the number of boats of buyers and sellers increase, until about 10am when most stuff is sold-out and the more empty boats leave, and the number of buyers dwindles the market start quietens down. The best time for a tour to explore the floating market in its full action and Venetia atmosphere is in the early morning from 6am until 9am.

Beside the river life activity of the floating Market, Banjarmasin also has a floating village on the outskirts of Banjarmasin, called Mantuil village.

For Family recreation, Banjarmasin has a recreation park Palau Hijau with a fishing location, a mini zoo, a children playground and other family entertainment facilities. The park is located near Syamsuddin Noor Banjarmasin airport, 24 kilometers from Banjarmasin town.
The Sabital Muhtadin Grand Mosque in the center of Banjarmasin town is the biggest mosque in South Kalimantan, and is the pride of its citizens. The mosque occupies an area of about ten hectares, in front of the Martapura river, and forms beautiful scenery tourism attraction, as a religious education and library.

In Banjarbaru the only museum of South Kalimantan can be found, The Lambung Mangkurat Museum has various historical relics from the Banjar kingdom, such as jars, plates, traditional costumes, and other antiquities. A copy of the holy Qur'an, written by a prominent Islamic leader named Syekh Muhammad Arsyad Al-Banjari (1710 - 1812), is also preserved here.

The Grave of Sultan Suriansyah who spread the Islamic religion to South Kalimantan lies at Kuin village, and can be reached within 15 minutes from the center of town.

Kembang Island at the delta of the Barito River which can be reached in 10 minutes from the Floating Market, by motorboat, occupies an area of about 60 hectares, and is inhabited by thousands of tame monkeys and birds. There is also a Chinese temple sacred place to pray. The best time to watch the wildlife and monkeys is in the early morning or in the late afternoon.

Bakut Island suit for a sightseeing tour as a wildlife reserve in the Barito River habited by the Proboscis monkeys (Nasalis larvatus), a Borneo Endemic species found only in Kalimantan, Sabah and Sarawak. The monkey has reddish brown fur, a prominent nose, and slanted eyes. Locals call these proboscis monkeys, Bekantans, found mostly in the mangrove forest around Borneo Island in the morning or afternoon.
Banjarmasin is the capital of South Kalimantan province. The town lies at the estuary of Barito and Martapura rivers, and is inhabited by more then a half a million people. It occupies an area of about 72 square kilometers embracing four districts as East Banjar, West Banjar, North Banjar and South Banjar. The town has a total of 50 villages.